Skip navigation and go to main content
by
November 12, 2019

Mechele West was a scary five-year-old. At least, that’s what her 24-year-old cousin-in-law thought. No one understood why he played with all the cousins but her or why he jumped at the sound of her voice and left a room when she entered it. One day, perplexed and intrigued, Mechele’s parents asked what was going on. Mechele recalls the strange story.

“I was playing in my cousin’s front yard one day, and I happened to glance through the bedroom window and see her husband choking her,” she remembers. “We didn’t know it at the time, but he had become abusive.” Without a second thought, Mechele sprung into action. “I heard a voice say, ‘Run’ and somehow I knew exactly what to do.” She barged into their bed- room, jumped on the bed and onto her cousin-in-law’s back, and placed her tiny bicep on his throat. “I was a scrawny five-year-old and he was a big guy. But I heard that voice say, ‘Squeeze. Squeeze.’ So I did,” she says. He let go of his wife and tried to get Mechele off his back, but he couldn’t dislodge her. He dropped to his knees and started convulsing, and amid her cousin’s screams, Mechele heard that voice say, “Let him go.” Her cousin eventually left her husband. And years later, Mechele realized that voice was the Holy Spirit, and if she had held that chokehold any longer, she could have caused permanent damage. 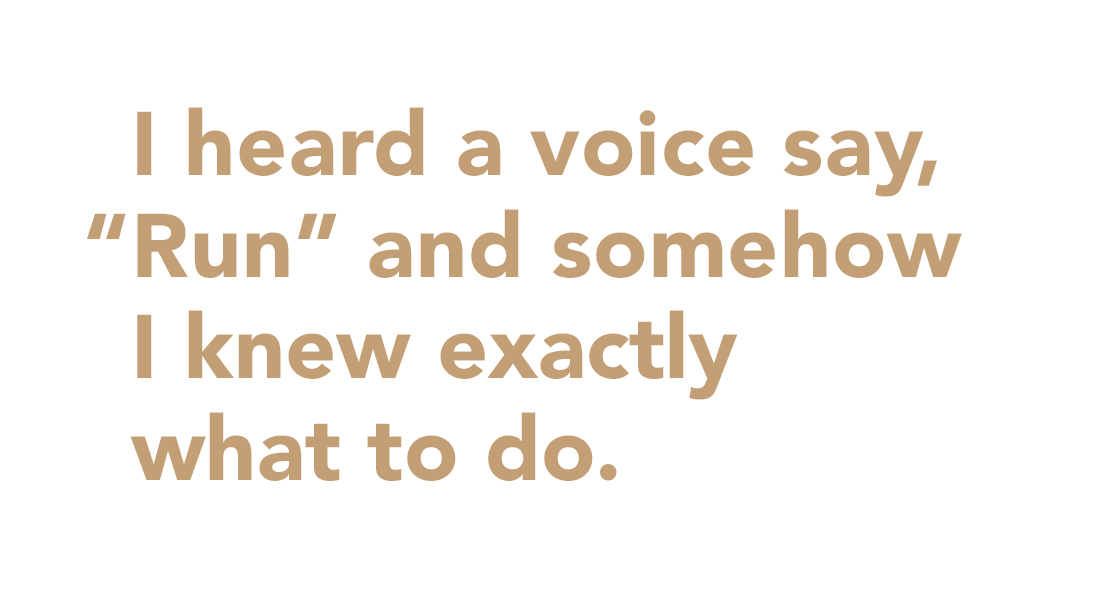 Mechele’s parents recognized this strong, protective gifting in Mechele and put her in martial arts classes for training. Her dad, an Air Force man, started quizzing her. They would walk past someone at the mall or on the Air Force base where they lived, and her dad would ask, “What was that man wearing?” Or a car would drive by and he would ask what make and model it was. “He made a game out of observing everything,” she says. “It was a way for me to get close to my dad, and I found out I was really good at it. I got to a point where we would be driving at night, and I could tell what kind of car was behind us just by the headlights.”

As Mechele grew and trained in various martial arts, these observation skills came in handy. “I would go to my martial arts tournaments and analyze every fighter there. I would watch their every move, learn their weaknesses, what side they favored, if they were all hands or feet, how they responded to offensive movements from another fighter,” she says. “Unbeknownst to me, I was training myself to see how people move and how people fight.” And when it was her turn to compete, whether she was fighting male or female, she had already scoped out their techniques and weaknesses. This knowledge, mixed with physical discipline, made her prepared for anything. “I ended up winning the Texas State Championship when I was 13,” she says. “I was really small as a young girl, but I was fast and smart.”

Because her family moved a lot with her dad’s position in the Air Force, she had her fair share of martial arts instructors from all over the world. Her talent and lack of fear, despite her smaller stature, caught the eye of several well-known instructors who took her under their wings. Instructors were always upping the ante in proportion with her talent, and she began experimenting with the use of various weapons. “I quickly grew out of fighting kids my own age and size and began fighting adults. I was less than 120 pounds soaking wet but fighting five or six full-grown men at a time,” she says. “I was often underestimated. But don’t be fooled. Girls can fight!”

After high school, Mechele joined the Air Force. After she left the military, she entered management in computer services. It was during this time that Mechele came back to Christ. As a young girl, going to church was mandatory. “We were a traditional African American family, and come Sunday morning, you were going to be in somebody’s church. That’s just what we were supposed to do,” she says. “But when I was in the military, I was exposed to quite a few different things, and I strayed.” It took some time for God to straighten her out, but she finally gave everything to Him. And she began to live and operate from a more Spirit-filled place than ever before, learning she had prophetic giftings and a calling to minister.

About 10 years into working in computer services, she was laid off. “Because of my martial arts and military experience, I had several people tell me I needed to become a cop. But being tied down to one place wasn’t me, and I didn’t want to do all the paperwork, so I got my security license instead,” she says. “It allowed me to travel and protect. Later, I got my PI license too.” Mechele worked in downtown Dallas as a private protection officer (PPO), getting to meet a lot of famous and talented people. “I met Dan Akroyd, Usher, Justin Timberlake, all the Dallas Cowboys, and all the Mavericks,” Mechele says. “And I used my job as an opportunity to minister. I would straight up say, ‘You need Jesus,’ and have them come to church with me.” Mechele had the opportunity to work federal protection and bodyguard details in addition to private protection, and although she enjoyed those times, she realized that protecting celebrities or bodyguarding was not something she really wanted to do for the long haul. What she really loved was protecting pastors and missionaries—the church. “I often volunteered at my church as an usher, and because of my background, the head usher would always position me closer to the pastor,” she says. “As a female, I blended in well and could provide a layer of hidden security—until I started body building. Then I stuck out a little more.”

During this time, Mechele reconnected with an old friend named Victor West, also an accomplished martial artist. “I met Victor at church on the Carswell Air Force base in Fort Worth, Texas. He was 23 when I first gave my number to him. I was only 14. He never called me,” she says with a laugh. “But I knew he would be my husband.” They both went their own ways for a time, remaining friends through mutual acquaintances. In 2008, twenty years after their initial encounter and discovering their common interest in martial arts and their passion for protecting others, they tied the knot.

Mechele and Victor, who often do consulting, both love doing security in churches and find it is fairly different than secular security. “If I only do what I have learned in security classes, I could never give a church all it needs,” she says. “You have to listen to the Holy Spirit. You have to be prayed up. When you’re protecting a church, you are a minister.” According to Mechele and Victor, being a security officer in a church doesn’t mean looking menacing or foreboding, which is often the gig with secular security. It means knowing where the threats could be and providing a watchful eye, but it also means keeping your heart open to ministering opportunities and offering a friendly smile, directions, prayer, compassion, and assistance with just about anything. “I’ve often had the opportunity to pray with people or talk to unruly teenagers who are being dragged to church by their parents,” she says. “Church security means providing space for the Holy Spirit and toning down situations instead of amplifying what the enemy is trying to do.” Mechele and Victor came to Gateway about seven years ago, and they eventually got plugged into the security team, using their giftings and expertise to protect our Gateway family. If you’ve ever seen Mechele on a weekend, she truly is a unique kind of minister.

A few years ago, all of Mechele’s life experience and knowledge from martial arts, security, body building, the Air Force, and her childhood in church all came together. She decided to go get her bachelor’s degree at Texas Christian University, majoring in religion and minoring in strength and conditioning. “When I gave my life back to Christ, the first thing I felt the Spirit tell me was, ‘You are going to be My fitness minister,’” she says. “It took me a while to get to this point, but when people asked me what I would do with a religion and fitness degree, I had His word to back up my decision.” In pursuit of this degree and calling, Mechele felt God urging her to exercise and eat a certain way. She is often at the gym, and people are naturally drawn to her discipline and determination. She is all in, all the time. In her words, “When I’m in the gym, I’m bringing it.” And Mechele, amid the barbells, bench presses, medicine balls, and treadmills, tells people about Christ. Now, Mechele and Victor teach private self-defense courses, continue to do church security and consulting, and continue their training in martial arts. Between the two of them, they have studied 14 styles, including karate, Shotokan, Taekwondo, jujitsu, Tang Soo Do, Hanbojutsu, kung fu, tai chi, and several others. They’ve also created two new martial arts styles. “Osebo is for able-bodied individuals and Chayah Agon was designed for the handicapped and elderly to defend themselves using whatever is available—whether it’s their canes or wheelchairs,” she says. Mechele has also used her degree from TCU to help write a book about how to honor God with your body, which she’s used to minister to many people, and now she’s pursuing her master’s in exercise science and psychology at Liberty University.

For Mechele, nothing is done without precision, intention, and a giant portion of discipline, and when asked about the biggest lessons during her life journey, she says, “Be sold out for what you believe in. Be willing to die for what you stand for. Be willing to give everything you have. Put 100 percent in. Your life is your ministry, so live it accordingly.”

Mechele, Victor, and their children attend the Southlake Campus.